It brings a huge smile to my face each year when I see that Hess has come out with its new “Hess Truck” for the holidays.  I hope they never stop doing this.

I was probably nine or ten years old, accompanying my mom as she began her Christmas shopping.  The very first place we went was a Hess gas station, where she bought the new Hess toy truck.  I got all excited, seeing this really cool truck with its working lights and everything, but wondered aloud why she had allowed me to see her buy it, as it surely wouldn’t be a surprise.

She said that it was not for me, or my brother (or my dad for that matter!).  She explained, “Some kids aren’t as lucky as you are.  They don’t have a Christmas.  They don’t have a tree, or anybody to put anything under it for them.  We must always remember that.”  She headed straight for the Marines’ Toys For Tots bin and dropped the truck in there.

After that, we began every season that way until I was old enough to go shopping on my own; we’d hit a Hess station and she’d buy the truck and then let me drop it in the Toys For Tots bin.  Some years were leaner than others, and sometimes there wasn’t much under our tree, but some kid I’d never meet, somewhere, would have a nice new Hess truck every year.  I found out, many years later, that she continued to do this long after my brother and I were grown and gone. 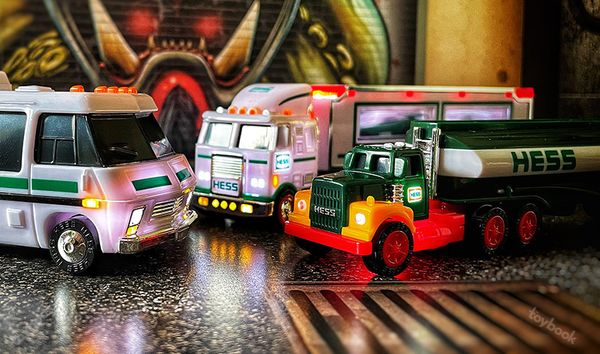